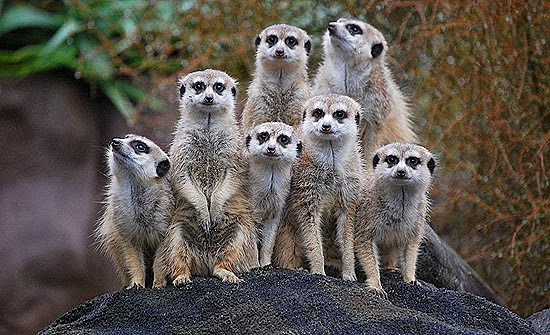 Top 10 Adorable Animals That You Didn’t Know Were Vicious Cannibals
By Andy Munro, Toptenz, 24 September 2013.
Cannibalism is a fairly normal part of nature. After all, why let perfectly good food go to waste, even if it used to be part of your best friend? But just because it’s common doesn’t mean we have to like it, and we particularly don’t have to like it when adorable animals that belong in petting zoos or colouring books decide to throw that away and instead start eating each other alive.
10. Rabbits 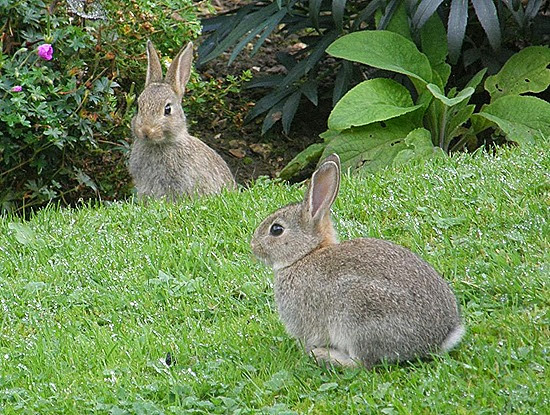 If there are two things rabbits are known for, it’s big floppy ears and being able to spit out a heck of a lot of babies. We’re going to talk about the second thing. One of the side effects of their excellent baby-making skills is that they won’t even try to raise young if they think they’ll just die anyway. Why bother when the next batch will be along in a moment? Whenever this happens, rabbits will eat their entire litter of babies in order to recoup some of the energy they invested in giving birth.
Unfortunately it doesn’t take much for rabbits to give up and turn their kids into snack-packs. A dog barking, the presence of a stranger, not quite enough food or just loud noises are enough to do the trick. Sometimes they’ll even eat their kids by accident. After giving birth, rabbits eat all the other stuff that comes out along with the babies, but every now and then they get a little carried away and chomp one of their kids as well. One can only assume that if a baby rabbit asks what happened to all its brothers and sisters, it gets eaten too.
9. Bonobos 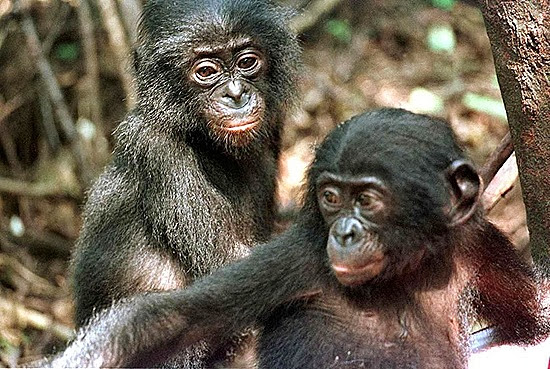 Bonobo apes are best known for being our closest animal relatives ,and for being super friendly with each other in sexy ways. While humans were working on relationship building blocks like shaking hands and pretending to laugh at unfunny jokes, bonobos were developing seventeen different ways to say “hello” with their genitals. In addition to their penchant for shaking each other’s trees, bonobos are also known to be one of the most altruistic of all the apes, always willing to lend a hand (or other body part) to a primate in need.
And that’s why it was so surprising to discover that bonobos are actually highly organised killers with a taste for baby meat. A group in the Congo was spotted hunting other apes. They would silently take up position around the base of a tree, then suddenly attack all at once, rush up into the branches to grab whatever they could, usually a youngster, before tearing it apart and eating it. On another occasion, a bonobo pack was seen eating one of their own children. It had died of natural causes and the mother had been carrying the body for a day, after which it seems the rest of the troupe had simply had enough. They forcibly took the body off the mother, despite her best efforts, and ate it right in front of her.
8. Polar Bears 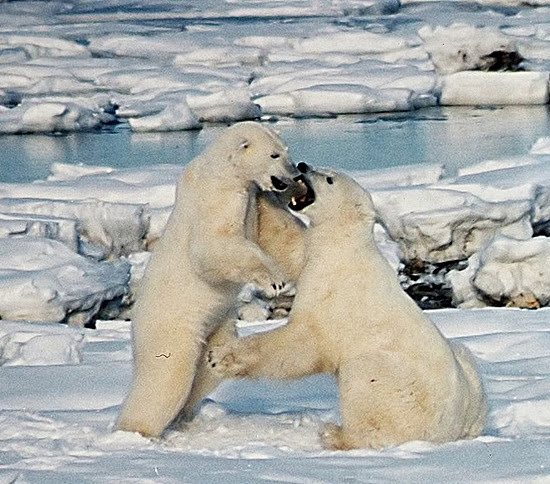 At least the bonobos waited until the baby was dead before eating it. Polar bears, however, just don’t have that kind of time, and like to speed the process along by biting faces off. Cannibalism is well-recorded in polar bears, usually when big males start figuring that smaller, younger bears would make a good snack.
Although it’s always happened, there have been more and more reports of polar bear cannibalism in recent years. This is thought to be one of the side effects of climate change. The bears generally hunt seals from drifting ice flows, which are now forming later in the year and melting earlier. Unable to get at the seals, polar bears look to alternative food sources, like each other. Score one for the seals!
7. Sea Lions 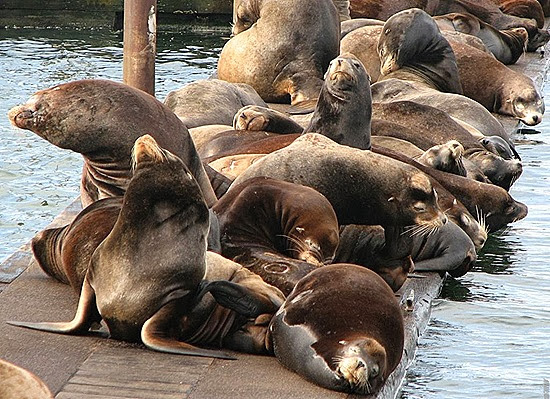 We take that back. Sea lions are also riding the cannibalism train but, unlike polar bears, they don’t really have the excuse of doing it for survival. Instead, their reasons seem to revolve around laziness and boredom. Male sea lions off the coast of New Zealand were seen stealing babies from the smaller and weaker females, who obviously weren’t too happy about it, but couldn’t do anything to stop it. They’d simply swim up and grab babies before dragging them out into the open water, at which point the unfortunate young would be dismembered and eaten.
No one’s exactly sure why they do this, unless the laziness/boredom theory is correct. Some theories say that the pups are just too tempting as a food source, while others speculate that they’re mostly killing for the sake of reducing upcoming competition, and the cannibalism is just so that food doesn’t go to waste.
6. Snails

While not quite as cuddly as some of the other entries on this list, snails are definitely the cuties of the gastropod world, which only makes it all the more surprising to find out that some are aggressive, dedicated cannibals. We’re talking about the rosy wolf snail, a species that uses its superior size and speed to hunt down other snails and eat them, shell and all. When it finds a slime path, the wolf snail will track it like its namesake - nose to the ground, following the trail. It’s a relentless hunter, and has been known to follow prey up trees and even underwater.
After it runs down its prey, the wolf snail has two ways of dealing with it. The smaller stuff it just eats whole, shell and all. But for the bigger meals, it will actually invade the other snail’s shell and eat it from the inside. Put simply, the wolf snail is a really, really good hunter. After all, they start early. From the moment they’re born they will start eating each other, and any unhatched eggs.  Experts have described wolf snail family reunions as “super-awkward.”
5. Ground Squirrel 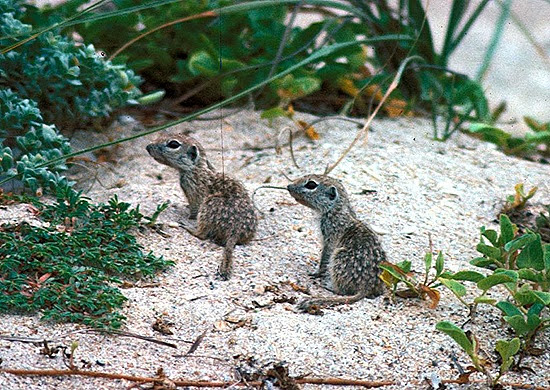 You would be hard pressed to find an animal that cares about kids less than a ground squirrel. This probably has something to do with the fact that their juveniles are at the very bottom of the food chain, and possess the survival skills of a gummy bear. Only a tiny fraction will make it through their first year, with the rest dying of cold, starvation, or predators (including other ground squirrels.)
The adults don’t need much of an excuse to make a meal out of babies, but they’re not entirely indiscriminate either, and only eat squirrels that aren’t related to them. In a way, it’s a vicious cycle. When a squirrel loses its children, it will usually move to a safer area and steal another’s burrow, making a meal out of any kids inside as it does, in turn causing that other squirrel to move to a different burrow and kill more kids and so on and so forth. Their reasons are twofold; firstly, killing unrelated babies is a great way to eliminate competition. And secondly, they’re just plain delicious and nutritious.
4. Octopuses

Although they’re not exactly huggable, octopuses (no, not octopi) are still kind of cute, with their surprising intelligence, inquisitive eyes, and occasional penchant for sexual cannibalism. Well, that last part’s not too cute. It’s not unheard of for octopuses to start hunting each other when food is scarce, but in 2007 researchers were surprised to see a female drag off and devour a smaller male after mating with it. It was the first time anyone had seen that kind of thing, and because they’re thorough types, these researchers were able to provide us with an unnecessarily detailed explanation of just what happened. Get ready for the worst Letter To Penthouse in history:
The female was swimming along, minding her own business, when a smaller male came along and started taking an interest. She returned the interest and they mated thirteen times over the next three and a half hours, because nobody parties like an octopus. After the twelfth time, a third octopus came along, but barely escaped with its life in a cloud of ink after the female aggressively chased it. Undeterred, the two octopuses started getting busy again. But this time she didn’t let go once they’d finished. Instead, she slowly enveloped and suffocated him, then dragged the body back to her lair and ate it over the course of two days. Debate still rages in the scientific community about whether or not the male died with a smile on its face.
3. Chickens 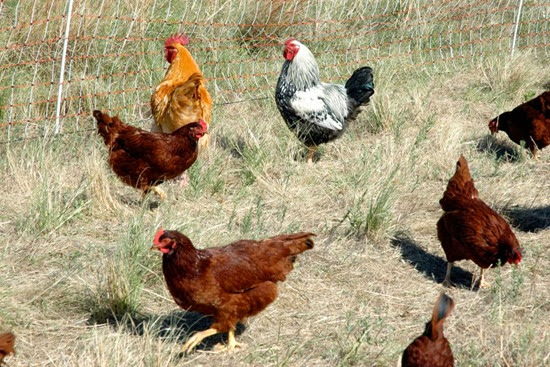 There are lots of reasons for a chicken to cross the road. Maybe it just wanted to get to the other side, or maybe it was trying to escape before the rest of its flock ate it alive. Cannibalism is a big problem on poultry farms, particularly ones where the animals don’t have a lot of room to move.
It starts off innocuously enough - hens will peck around looking for food and every now and then they’ll nip at each other. But sometimes, those nips will draw blood, and sometimes they’ll decide they like the taste. Once the wound is open, it’s fair game. Other chickens within reach will pile on the unfortunate victim, and start pecking off a piece for themselves. Any attempt to fight back will just draw more attention and make things worse. It’s not pretty but, at the end of the day, it’s their own fault for tasting like chicken.
2. Tadpoles

With all these grown-up animals eating children, having children eat each other makes a nice change of pace - at least then they’re picking on someone their own size. But in the case of the spadefoot toad, they don’t stay the same size for long. Only a small fraction of their tadpoles ever grow up; the rest become food for the lucky few, and the more these lucky few eat, the bigger they get. Eventually, they’re several times the size of their buddies, easily able to hunt them down.
Interestingly enough, they’re able to recognize their siblings, and will avoid eating them. The reason for this is simple. The tadpoles spend their childhood (tadpolehood?) living in a small puddle in the middle of a desert. Unfortunately, it’s not long before the puddle will dry out. Their only chance of survival is to grow up and go underground before it disappears entirely. Growing this fast requires meat, and as much of it as possible. In the absence of a steakhouse, this means they have to eat each other.
1. Meerkats 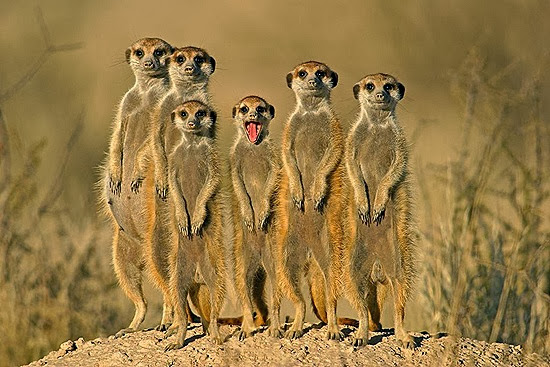 Meerkats are probably one of the cutest animals on the planet. They work together, raise children together, and have just the cutest widdle fuzzy tummies and itty-bitty furry faces. Their cannibalistic tendencies are slightly less cute. The problem is that their native desert homes just don’t have enough food to support all the babies. Generally there’s only enough for one litter at a time, and each mother does all she can to make sure that it’s hers.
The first order of business for a pregnant female is killing every baby she can lay her teeth on. No prizes for guessing how they dispose of all that adorable fresh meat. Fewer mouths to feed mean her own children are more likely to have enough to eat. The dominant matriarch will take it a step further, and temporarily expel other females from the nest to stop them from getting pregnant. But after all that, once the unlucky babies have been eaten and the lucky ones have been born, the expelled females will return, and the whole colony will raise the surviving young together. No hard feelings.
Top image: A group of Meerkats at Auckland Zoo, New Zealand. Credit: Ashleigh Thompson/Wikimedia Commons.
[Source: Toptenz. Edited. Top image added.]