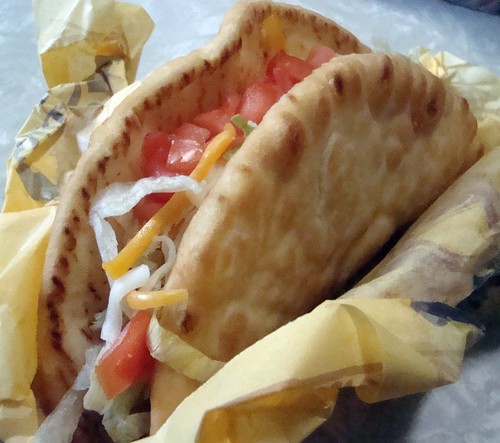 Taco Bell is appealing to bacon lovers once again with the Taco Bell Bacon Club Chalupa.  And here it is, two full months into it's limited-time-only run, and I'm just getting to review it because it's been awhile since I was anywhere near a Taco Bell.  I gotta get on an email alert list from those guys or something so I know when something new is coming out.
Anyway.  The Bacon Club Chalupa has bacon, marinated chunks of all-white-meat chicken, lettuce, tomato, shredded cheese, and something Taco Bell calls "club sauce" on a crispy-crunchy chalupa shell.  An interesting idea - a Taco Bell take on a club sandwich.  And it's not bad - the chicken is moist and tender, the bacon is decent though crumbled in with kind of a light hand, and even the club sauce is pretty good (It seems to be mayonnaise-based, but there is a lot of flavor going on in there, with onion, garlic, mustard, buttermilk, and cheeses blended in.)
It's also got 490 calories, which seems to be kind of a lot for something that really isn't that physically big.  You could eat three Taco Bell crunchy tacos for the same calorie count and probably feel somewhat more full.
.