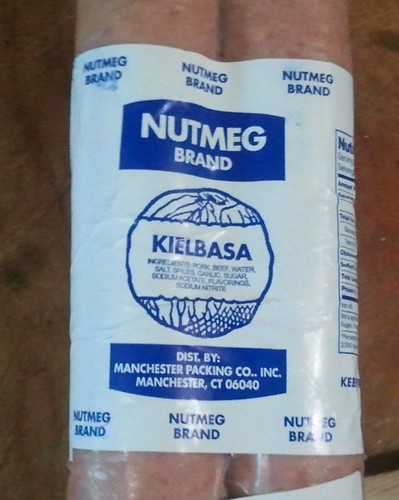 I don't remembrer liking kielbasa much when I was a kid. - I remember it being kind of aggressively greasy and harshly spiced. And it always seemed "tough," somehow like, sure, it's a sausage but it's not like breakfast sausage or Italian sausage, it's kind of like pepperoni because it's kind of hard and more difficult to cut.
That's because my mother, who barely had two nickels to rub together, usually bought an already-inexpensive national brand made even more inexpensive with coupons. It was cheap and shitty and tasted it.
It wasn't until I got older that I discovered how good kielbasa could be, and that was thanks to the big variety of locally-made brands I discovered starting when I was in my teens and continuing even now.
Like Nutmeg Brand, for example. I had never tried Nutmeg before, which is distributed by Manchester Packing Company/Bogner Meats. (Once upon a time, it was made by them, too, but these days most of Bogner's meat processing is done under contract by Hummel Brothers in New Haven using Bogner's recipes.) I'd left Nutmeg alone because it was so pale looking that I thought it was a fresh kielbasa as opposed to a smoked kielbasa, which I prefer.
Anyway, on a recent visit to Bogner, Maryanne and I were looking for something relatively quick we could make for supper, and she suggested a kielbasa. "I dunno," I said, "These look like fresh kielbasas. I thought we both prefered them smoked."
"When I was a little girl, my grandmother used to get both kinds," Maryanne told me. "Especially at Easter, because they used to like fresh kielbasa for cutting up into our borscht, and smoked to eat on our plate. They were both good. Go ahead and get one."
So we did.

Surprise! Nutmeg Kielbasa is smoked! Just not, apparently, as heavily or for as long a time as most of the other commercial kielbasas we've had in the past. There is smoke enough to give the sausage a decent and hearty flavor.  The meat is finely ground without any of the coarser chunks I often find in other locally-made brands, and there seems to be a pleasant-enough level of fat used in the blend (by that I mean that the kielbasa isn't excessively greasy, but on the other hand the meat isn't dry or crumbly either. They've done a good job.)
Served with potato salad and greens, it made for a very pleasant late-summer dinner, and it holds up well to my long-standing local favorite, Janik.