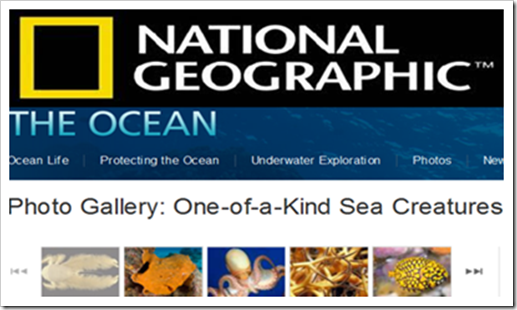 Photograph by Ifremer A. Fifis, Census of Marine Life.
The yeti crab is so unusual that a whole new family of animal had to be created to classify it. Kiwa hirsuta was found on the floor of the 7,540-foot-deep (2,300-meter-deep) Pacific Ocean some 900 miles (1,500 kilometres) south of Easter Island. In many ways the newly discovered species remains a mystery. Its hairy pincer arms host colonies of bacteria, which it may cultivate for food, for protection from toxic fluids issuing from nearby volcanic vents, or as “sensors” that help the blind animal find a mate.

Photograph by Enric Sala.
This frogfish looks just like its rocky seafloor perch - a guise to tempt a potential meal into coming a bit too close. The fish can change texture and even colour to blend with its surroundings. It can also lure potential prey with a fleshy “fishing rod” complete with a wormlike lure. The frogfish is so well adapted to life on the bottom that it uses pectoral fins to waddle, rather than swim, along the seafloor.

Photograph by Luis Miguel Cortes, My Shot.
The common octopus is anything but ordinary. This most intelligent of the invertebrates uses an amazing suite of abilities to avoid predators like sharks, eels, and dolphins. A master of camouflage, the octopus can change colour and shape to remain unseen, and release a “smoke screen” of black ink when spotted. Even if an octopus has been nabbed, the game isn’t over - it can simply shed an arm to escape trouble and regrow the appendage later.

Photograph by Avi Klapfer/SeaPics.com.
A basket star’s many arms and branches form an inescapable web to trap favoured prey. Each arm can be four to five times bigger than the animal’s body, and each holds numerous branches that can be knotted around zooplankton and other favoured foods that the bottom-dweller filters from the currents.

Photograph by Utsunomiya/e-Photography/SeaPics.com.
Finding food at night can be a challenge, but the colourful pinecone fish has a secret weapon - natural headlights. Luminous bacteria colonize two organs on the fish’s lower jaw and produce a beam that helps shine a light on the predator’s next meal.

Photograph by Tim Laman.
The ribbon eel has a unique appearance: trumpet-like nostrils and a lower jaw with three tentacles. But even more amazing than this eel’s physiology is its signature behaviour - a propensity for sex change. Functioning males regularly become females and change colours as well, adopting a nearly yellow hue that apparently suits their more feminine side.

Photograph by David Littschwager.
Siphonophores are related to corals and true jellyfish but are really not quite like any other animal. The gelatinous creatures are colonial, meaning they are actually made up of an attached, integrated collection of individual parts - each of which has a highly specialized function such as catching prey, digesting prey, reproduction, or locomotion. In some species the siphonophore’s tubular stem can reach 130 feet long (40 meters long) - even longer than the blue whale.

Photograph by Denise McNair, My Shot.
Get Wallpaper
Common on many Caribbean and Atlantic coral reefs, the flamingo tongue snail feeds on toxic sea fans and not only suffers no harm, it incorporates the fans' venom and becomes toxic itself. Shell collectors are often attracted to the colourful snails, but in fact the shell itself is white - it’s only the living animal inside that produces the striking colour pattern.

Photograph by Bartek Jarecki, My Shot.
Get Wallpaper
A flying fish glides gracefully through the air, mirrored below by its reflection on the calm waters of the Tasman Sea. There are some 40 species of flying fish. All have evolved wing-like pectoral fins that allow them to take to the air after an underwater take-off sprint at speeds of some 37 miles an hour (60 kilometres an hour). The fish have been known to soar 655 feet (200 meters) in a single flight.