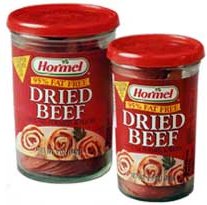 Dried beef is not what it used to be. Oh, the little jars are the same - small vacuum-packed tumblers with the snap-off lids - but the meat inside has changed. Once upon a time, dried beef used to be sliced from a real cut of meat; it looked like thin slices taken from a dried roast beef. Today, though, it's all "chopped and formed." Hormel and Armour make their dried beef out of some kind of dessicated hamburger.

A few years ago, when this changeover to cheapness was first happening, I found a bunch of jars of Beardsley brand dried beef in a local job lot store and bought every one of them I could grab. When my stash was all gone, though, I thought that was the end of good dried beef forever. I refuse to buy the chopped and formed stuff. 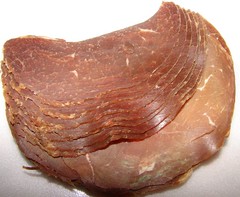 But joy has returned! Poking through the packaged-meat section of Food Zone International in Springfield, I found refrigerated envelopes of Knauss Dried Beef. I couldn't see through the packaging, but there was nothing on the label that indicated they were chopped and formed, so I took a chance and bought a couple. And to my joy and delight, I found that Knauss does indeed make the real thing (as shown on the left.)

Probably because it's not meant to be entirely shelf-stable, the Knauss brand is not as salty as the Hormel stuff in a jar, so it needed no rinsing or pre-soak to take some of the saltiness away. This morning, I enjoyed a delicious breakfast of that time-honored classic "Shit on a Shingle" - also known by the less-colorful name "creamed chipped beef on toast" and it was great.

I am entirely convinced that the bad reputation this wonderful breakfast has is due to ignorant people who have only heard it referred to as "Shit on a Shingle" or "SOS" and have decided that if it's called something so awful, it must not taste very good. So, here's my recipe.

Melt the butter in a skillet over medium heat until it is foamy. Add the dried beef, breaking it up into little bits as you do so. Stir the beef around in the butter to sizzle it deliciously, and when it is all nicely coated with butter and just starting to brown and curl at the edges, sprinkle it all over with the flour. Stir the flour into the beef thoroughly, then turn the heat down to low and cook for a few minutes until the flour begins to color a bit - just enough to get rid of the "raw flour" taste. 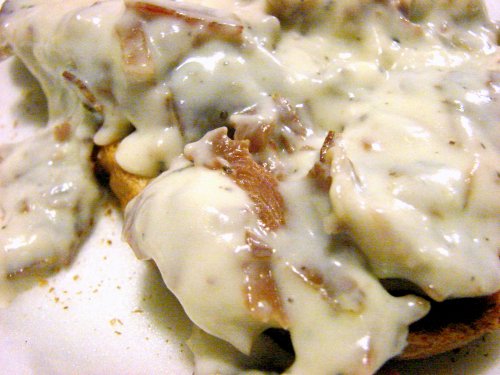 With the heat back up to medium-high, stir in the milk all at once and continue to stir until the mixture bubbles and starts to thicken into gravy. You won't need much salt (and if you do, use celery salt!) but season with a good shot of Worcestershire sauce, some nutmeg, and as much freshly ground black pepper as you like - I like lots of it in this! Keep stirring until the gravy is thickened and delicious - taste and adjust the seasoning if you like, and if the gravy is too thick stir in more milk, just a wee bit at a time, until it's got the consistency you like.

Serve on toast - but if you happen to have a few freshly-made flaky and mouth-watering homemade biscuits on hand, split them and ladle the SOS right on top for heavenly delight.

E. W. Knauss & Sons, the world's largest producer of dried beef, was acquired by Alderfer Inc. in 2004. Click here to go to Alderfer's website; there you will find a search function to help you locate a retailer near you that carries Knauss dried beef. And if you can't find it locally, Alderfer offers an online purchasing option and full contact info so you can write to them if you like.
.