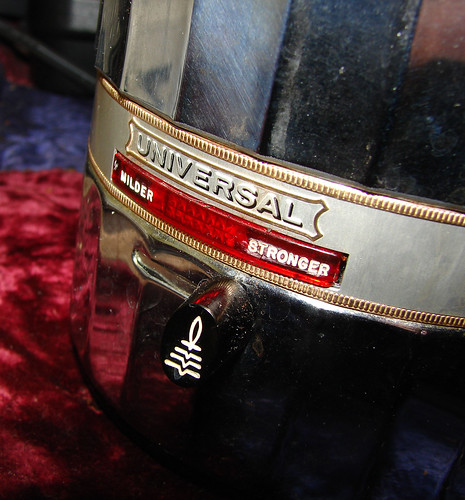 A couple of years ago, we moved to an old 1920's Craftsman-style farmhouse. It's a great little house, with a lot of pre-war charm, because it hasn't been updated in more than fifty years. There are good points to that - all of the original woodwork, including the gorgeous beaded wainscot in the kitchen, is still intact and in perfect condition, for example. But there are some significant drawbacks.

When we moved in, there were only two electrical outlets in the kitchen. One was for the refrigerator, and the other was next to the kitchen door, where a small utility table had been set.

It was obvious that rewiring the kitchen was a priority, but until that could be arranged we needed to find a replacement for our Bunn-O-Matic drip coffee maker. The Bunn has a small hot water heater and holding tank built into it, and requires an electric outlet all its own, and we didn't have any to spare.

A few days later I found a vintage 1960s General Electric percolator at a thrift store. I brought it home and not only did it work perfectly, it could be unplugged and put away in the pantry when not in use. That night, we rediscovered how delicious perked coffee could be. Perking brought out a fuller body and richer flavor than the drip process ever did. It was like we were tasting coffee for the first time all over again.

That weekend the Bunn-O-Matic, freshly scrubbed and back in its original box, went to the Salvation Army store to find a new home. We haven't looked back since.


Along the way, I seem to have picked up a new hobby: collecting percolators. We still have that old GE...and two or three other GE pots with different configurations, a handful of vintage Sunbeams and Universals, and even a couple of beautiful-but-unique brands from the 1920's and 1930's. Every one of them works, and we rotate them in and out of service so that over the course of a few months they all get used for at least a few days.