Adapted from The Way to Cook by Julia Child

Now that February's here, winter is starting to feel like it's been here a long time. It doesn't yet seem like spring will never come, but there are more bleak, gray days than sunny ones, and it's been very cold in the Northeast this year. It was zero degrees when we pulled into the garage last night, and a balmy 7 this morning. 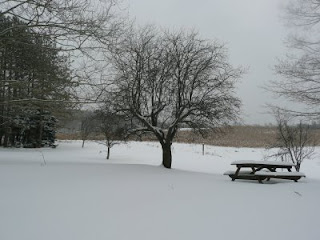 On the upside, there has been a lot of snow upstate so Walter's happy because the alpine skiing has been good. Even Walter Jones and Peggy are happy because for the first year in quite a few, the cross-country skiing in Vermont has been fabulous. So everyone's taking advantage of that and enjoying it. Me? I'm cooking as many comfort foods as I can think of and seriously eying a book called Eat, Feed, Autumn, Winter: 30 Ways to Celebrate When the Mercury Drops, which if I don't get around to snagging before the April thaw, won't seem as appealing, so I better get on it.

I'm making shrimp creole for dinner tonight. It just sounded so good when I was at Fairway last night - all shrimp-y and spicy and tomato-y. And it still does sound good, but it isn't, strictly speaking, a winter dish. Heck, as far as I know, they don't even HAVE winter in New Orleans. In fact, I always make it for my birthday, which falls in the middle of June and is usually the first blistering day of summer. (Once I made it for Thanksgiving dinner, so you can see how much I like it.)

I know the shrimp will hit the spot tonight, but I got up this morning thinking about Julia's Non-Traditional Moussaka. It's also good and tomato-y and definitely comfort food at its best.

The book this recipe comes from is an excellent "how to cook" book. There are many of them out there, but this one (along with Delia Smith's wonderful English book How to Cook) is one of the very best. It doesn't replace Joy of Cooking in the American Kitchen, because what would you do if you wanted to cook an opposum or make a Rob Roy? Julia's The Way to Cook wouldn't help you there, but it would make a great gift for a bridal shower and would be useful as part of anyone's library.

In this recipe, you can use leftover leg of lamb, or you can start off with ground lamb or even ground beef, which I do often since I can easily get organic ground beef. I've even made it with venison, and that was good too. You could probably use buffalo or bison. Use whatever red meat strikes your fancy, but I would not, however, even think of using ground poultry or pork.

If this sounds at all good to you, try it. I'm sure you'll like it.

Wash and dry the eggplants; don't peel them. Cut the eggplants into 1-inch cubes. Salt the cubes lightly, and let them sit in a colander on a plate or in the sink for 15 to 20 minutes. Then pat the eggplant dry with paper towels. Sauté the cubes in a large frying pan or saucier until they release their liquid and start to brown, adding more olive oil as necessary as you go along. Using a slotted spoon, remove the cubes of eggplant to a long piece of aluminum foil, making three equal piles of eggplant cubes.

3/4 cup washed and dried parsley sprigs, chopped
1-1/2 cups minced onion
2 tablespoons olive oil
2 large cloves of garlic, pureed*
3 cups leftover roast (lamb or beef) cut into 1-inch chunks and processed not too fine in a food processor or 1-1/2 pounds raw ground meat (lamb or beef)
2 cups canned tomatoes (plum tomatoes are good), drained and sieved through a food mill
3/4 cup of the red wine you will drink with your meal or dry white French vermouth, such as Noilly Prat (which is good to always have in the house to use for cooking when you don't want to open a bottle of wine for a recipe)
1/8 teaspoon ground allspice
1 large egg, beaten
Salt and pepper

Over medium heat, sauté the minced onion in a frying pan or saucier with the 2 tablespoons of olive oil. When the onions are tender, after about 6 minutes, add the pureed garlic, and cook for just about a minute. You don't want the garlic to burn and get bitter.

Raise the heat to just barely high, and add the meat, letting it brown lightly. Add the tomatoes, wine, parsley, allspice, and salt to taste. Lower the heat, and simmer for half an hour, stirring often, until the mixture holds its shape softly in a spoon. Taste. Add more salt if needed, and add a little black pepper if you like. Remove from the heat, stir in the beaten egg, and set aside.

Use a spoon to push the meat to the sides of the pan so you have two equal portions of meat.

Assemble the Dish to This Point

To make a white sauce, melt the butter in a 2- to 2-1/2 quart saucepan or fait tout (also known as a Windsor pan - a saucepan with sloping sides). Add the flour, and with a wooden spoon blend it into the butter. Cook the butter and flour together for 2 minutes to make a roux without letting it color.

Remove the pan from the heat, and when the roux stops bubbling, add 1-1/2 cups of hot milk all at once, whisking constantly. When the sauce is smooth, add the other 1/2 cup of milk , and stir until that is smooth too. Season lightly with salt and freshly ground white pepper. Simmer for 3 minutes.

Remove the pan from the heat, and blend in the cup of shredded mozzarella or Swiss cheese until the sauce is smooth. Season with more salt and pepper if necessary. Add a pinch of nutmeg, and stir it into the sauce.

Scatter the 1/2 cup of shredded Swiss cheese over the top of the sauce as evenly as possible, and bake the casserole in a 350 degree oven for 45 minutes until the casserole is bubbling, and the top is lightly browned.

Let the casserole cool for at least ten minutes before serving. Julia says it can be served warm, tepid, or even cold, but cold doesn't sound appealing to me at all - certainly not on a frigid winter's night, which is when this is truly delicious.
Serve with hot buttered peas and a cucumber salad made with Greek yogurt instead of sour cream or cacik.
Print recipe.

*I try not to get special gadgets for all kinds of things when simple kitchen items work well. And I know that you can puree garlic with a 3-1/2 inch paring knife.

But this tool by Microplane is so great that I would actually encourage you to get it. It grates onion beautifully, and I'm sure it will puree garlic too. You can move the lily (garlic or onion) back and forth, so it's better than mincing for things like meatballs. 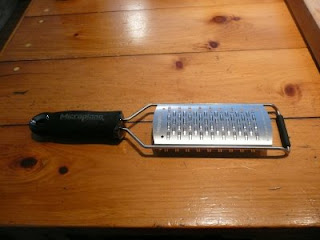 It's called a two-way ribbon grater by Microplane. I got mine one day when I was poking around in Williams Sonoma, and I am finding it useful. This one looks like it has the same grating surface as mine - it has the same number of rows and the same configuration, so I would guess that it's the same as mine - but since I can't be 100 per cent sure, I can't actually recommend it.