'Mr. Queen 'Shows Changes in the Dynamics between Kim So Yong and King Cheoljong, Who Became More Interested And Starts To Grow In Love. 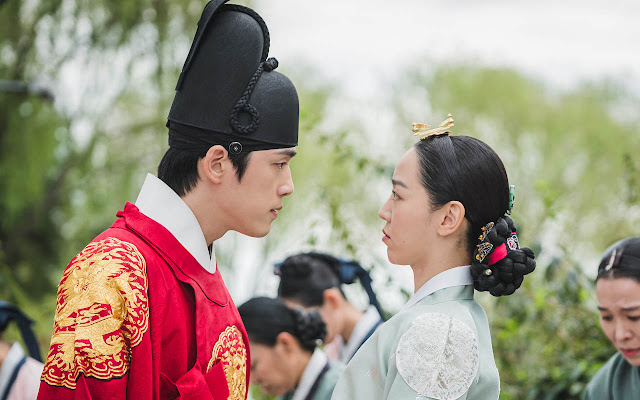 "Mr. Queen" will present the latest episode on Saturday (26/12) tonight. Ahead of the show, the production team as usual released a photo of the interesting scene of the tvN drama's main partner, Shin Hye Sun and Kim Jung Hyun.

In the previous episode of "Mr. Queen", Kim So Yong (Shin Hye Sun) tried to win over Queen Dowager Sunwon (Bae Jong Ok). After winning his heart, Kim So Yong convinced the ruling queen to give him permission to refill the lake with water.

But things take an unexpected turn when King Cheoljong (Kim Jung Hyun) throws himself in danger to save the life of Jo Hwa Jin (Seol In Ah), who is framed for the attempted murder of Kim So Yong.

Feeling unwilling to be defeated and full of determination, Kim So Yong suddenly comes to the rescue of the two of them, declaring in front of Queen Sunwon that he actually tried to kill himself instead of being harmed by someone.

The new scene photo of “Mr. Queen” shows the change in the dynamic between Kim So Yong and King Cheoljong, who became more and more interested and began to grow in love with the unexpected change in the queen's behavior.

Although King Cheoljong initially harbored contempt for Kim So Yong and even believed that he was behind the plot to frame Jo Hwa Jin, the man began to see it from a different perspective.

In the newly released “Mr. Queen” photo, Kim So Yong couldn't hold back his excitement as it rained heavily. Not afraid of getting soaked, she stood in the rain and greeted him with open arms only to be bothered by her husband, who came up to the soaking wet Kim So Yong and hurriedly tried to cover her with his umbrella.

Even though Kim So Yong responded to his concern with an irritated frown, a worried look in Cheoljong's eyes as he tried to keep his hints dry about his growing feelings about her.