Once you've cut up a chicken into bake-able, cook-able, grill-able, fry-able pieces, you're still left with some meat on those bones. If you're like me and hate to waste food, you can't stand the thought of throwing that carcass into the trash. But how do you get at those last bits of meat? You make broth!

Making your own broth is easier than you might think with little time spent on chopping veggies. Place the bony chicken pieces in a stock pot. Cut up the carrot, celery, and onion into large pieces. Toss them into the pot. Peel a couple of garlic cloves and cut them in half. Toss those in too. Toss in some sprigs of parsley, a couple of bay leaves, salt, and pepper. Pour in 8 cups of cold water. 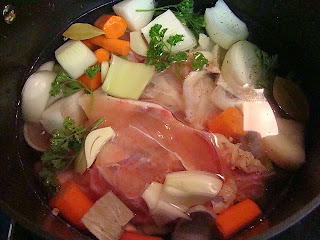 Bring the contents of the pot to a boil, then reduce heat and simmer for 2-1/2 hours. 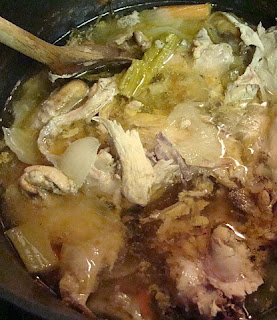 Remove the pieces of meat and cool. 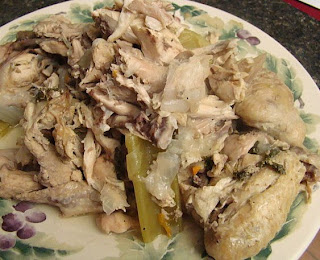 Now you can pick that meat off of the bone and discard the fat and other unappetizing pieces. Freeze these chicken pieces for later use in casseroles, soup, or pizza OR use them sooner. Whatever fits your schedule. 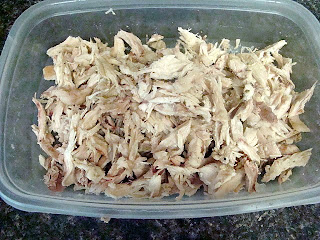 Now strain the broth through a colander. You can use cheesecloth here too, or clarify the broth for clear soup using the directions found below. I knew that my broth would become broccoli cheese soup, so no need for extra straining steps here. 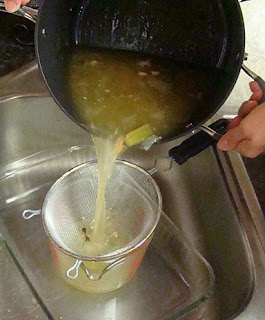 This recipe made about 6 cups of broth. Here are the first 4. Notice the layer of fat at the top? 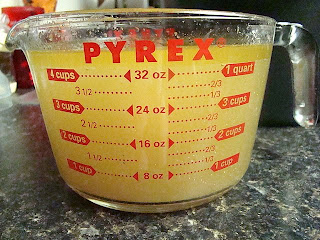 Chill the broth in a refrigerator, then skim the fat off of the top and discard. 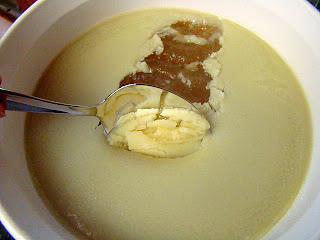 You can use the broth right away, or stick it in the fridge for a few days before using. It also freezes well for up to 6 months. I froze mine in a glass canning jar. You can use a plastic freezer container for freezing also. Mine seem to have all disappeared to my husband's place of work at this time. Transporters of leftovers, never to be seen again. I recently put out an APB for my plastic containers, to no avail. I know how to pick my battles, people. I used the glass jar. 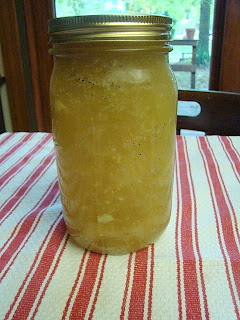 When you're ready, thaw broth in the refrigerator and use in your recipe of choice. This week, broccoli cheese soup sounded good to me. 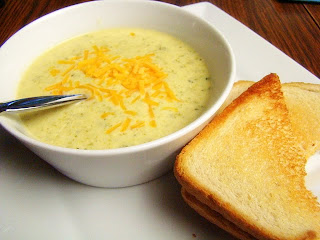 2. To strain, pour broth through a large sieve or colander lined with 2 layers of cheesecloth. Discard vegetables and seasonings. If desired, clarify broth.* If using the broth while hot, skim fat. (Or chill broth, then lift off fat.) If desired, when bones are cool enough to handle, remove meat from bones and reserve meat for another use. Discard bones. Store broth and reserved meat, if any, in separate covered containers in the refrigerator up to 3 days or in the freezer up to 6 months. Makes about 6 cups broth and 2-1/2 cups meat.

*Note: For crystal-clear soups, use broth that's been clarified. First, separate an egg, saving the yolk for another use. In a Dutch oven or kettle combine your strained broth, 1/4 cup cold water, and the egg white. Bring to boiling. Remove from heat and let stand for 5 minutes. Strain the broth through a large sieve or colander lined with several layers of damp, 100 percent cotton cheesecloth.