Sunday was the day to make fresh pasta to go with the leftover daube de bœuf that Ken made on Friday. I've made pasta before, but still, I did a little research in our cookbooks and on the 'net. The recipe I used was 3/4 cup flour per egg, and I used two eggs. 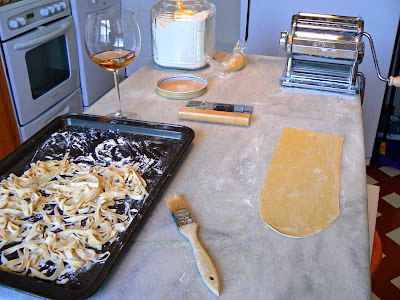 The pasta making process under way in our kitchen. A glass of rosé is de rigueur.

After the pasta was mixed and kneaded, I wrapped it in plastic and let it rest in the refrigerator for about an hour before putting it through the pasta machine. I noticed in my research that some people used their Kitchen Aid mixers to do both the mixing and the kneading, so I tried that for the first time. In the past, I always mixed and kneaded by hand because that's the way the celebrity chefs always said to do it. 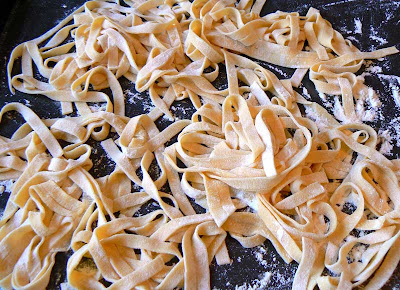 Well, guess what ? The Kitchen Aid mixed and kneaded the best pasta I've ever made. So there, you celebrity chefs, take that ! Using the Kitchen Aid was much, much easier and that's the way I'll do it from now on. Unfortunately, I didn't take any photos of the mixing and kneading. 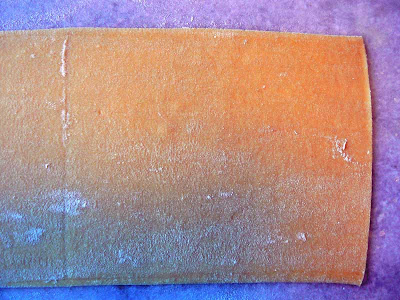 A sheet of pasta ready for cutting.

About five years ago Ken gave me the pasta machine that I've been using since then to dabble in fresh pasta. My experience has been that it makes great tagliatelles, and that's about it. I've tried spaghetti and ravioli, but without success. Ken says we should do our own lasagne, and we will try that soon. It's just a matter of cutting the pasta sheets by hand into lasagne instead of using the attachment to make tagliatelles. 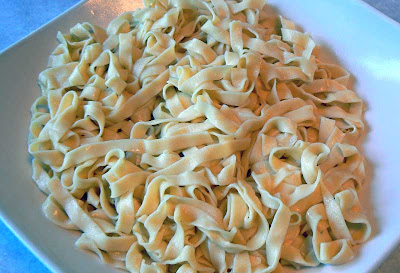 The cooked tagliatelles just before we served them along side beef stew.

At any rate, the pasta was great with the beef stew. You expected less ?