I've got a pile of concrete blocks in my back yard. In the spring, they'll be the foundation blocks for my henhouse, but right now they're just a bigass ugly pile of concrete blocks. So I decided to stack them in sort of a circular formation and make an improvised fire pit. The nights are cooling down to almost chilly, and it's kind of nice to light an outdoor fire when my wife and I get home from work so we can enjoy the flames and a beer and the company of the dog as he stretches out in fron to f the fire to bogart the heat. 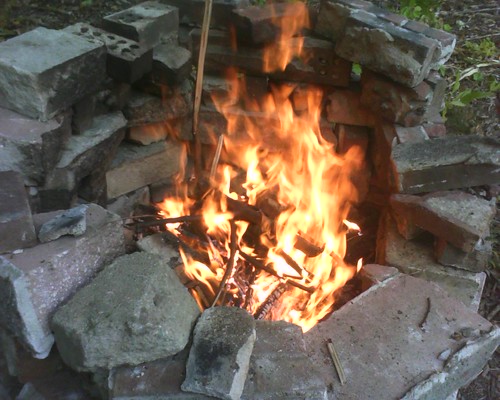 You can see that it's nothing much to look at - but after all, it's temporary, and for now it's serving the purpose. I've got a couple of cut-up oak pallets to burn and a bunch of maple, walnut, and oak branches in my brush pile, so the past few nights have been warm and crackling. And although you can't really see it in this photo, the fire pit also has a strategic arrangement of bricks in the center that allows me to keep barbeuce baskets at just the right height above the embers for cooking - because as long as I have a nice hardwood fire going anyway, I might as well make supper out there when the fire dies down and the coals glow cherry-red.

Last night, for example, when the initial burn of maple branches had settled into embers, I bedded half a dozen foil-wrapped potatoes in the coals and shoveled more on top of them to help them cooke evenly. While they cooked in the front of the pit, I piled up some pallet cuts in the back and center of the pit and brought up the fire again. Maryanne and I had a Mike's Lemonade as we watched the flames and idly poked at the dog, and eventually the new fire settled down to another nice layer of cooking-ready embers. 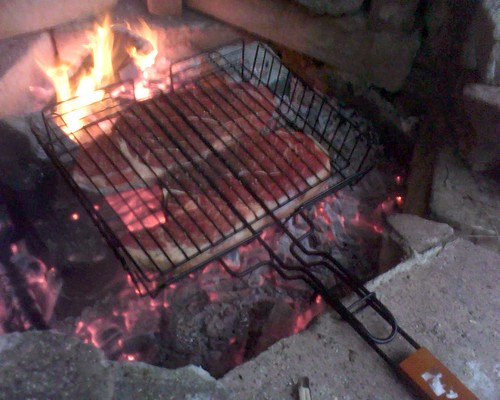 Just a couple of likely-looking shoulder-cut London broils, over the heat for a few minutes per side for the perfect rare steaks. When the meat was done, I dug the spuds out of the coals and we had supper.

Mostly, this meal turned out pretty good. A couple of the potatoes - set closer to the center of the action than the others - were fairly well incinerated in their cozy foil wrappers. They had brick-hard carbon exteriors and a shrunken dehydrated core. I'm going to have to work on my potato technique, I guess. But I've got time. We've got another three weeks or more before the nights get so short and so cold that it stops being worth it to build a backyard blaze.