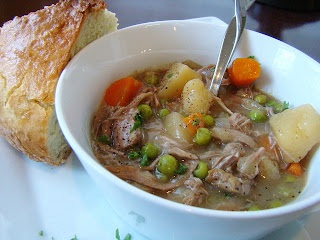 While there are countless recipes for Irish Stew, many of them resembled my regular beef stew recipe: meat, carrots, potatoes, broth, spices. For this St. Patty's day I decided to go for more traditional Irish "peasant" feel and use lamb. I once read that back in the days of St. Patrick that only the rich could afford to raise/purchase beef.

We raised sheep on our farm when I was growing up, and it's fair to say that I ate enough lamb to counter any cravings that I would have later in life. Still, I've seen so many great lamb recipes out there lately that I decided to re-visit lamb for this stew. I ordered a lamb shoulder roast from the butcher at my local supermarket and picked it up a couple of days later. The package said that the lamb was "free range".

Well, well, well. Now we've struck a nerve in my little Irish temper. Here's the deal: I've never seen a lamb that wasn't free range. They don't fare well on feed lots. From americanlamb.com: "American Lambs are raised on natural grasses in lush pastures across the country and are free of artificial growth hormones. Most lamb produced east of the Mississippi River is not grain fed, because producers have access to high-quality natural resources. Some western American Lambs are big enough right off the range, but most lamb produced west of the Mississippi River is finished on a high quality diet of corn and alfalfa. The grain finishing creates a consistent and delicious flavor that American consumers prefer."

I suspect that labelling lamb as "free range" is much like labelling chicken as "hormone free" to give the product a marketing edge. What am I talking about? Well, we ALL eat hormone free chicken here in the U.S. Did you know that USDA regulations prohibit poultry growers from giving hormones and steroids to their birds, so all chicken is hormone-free?

So yeah, when you read labels boasting "hormone free" or "steroid free" there IS truth in the advertising...but only because they are just following the law, not because they are doing anything that sets them apart from other growers.

Okay, sorry for the mini-rant. I should clarify before I continue, I don't fault anyone for trying to better market their product to increase sales. More power to them! I just wanted ya'll to know. : ) Sometimes I start typing about things like stew and bread and my fingers take over and do a little free association de-bunking. : )

So back to this fancy free-range lamb. All $14 worth. So much for "peasant" pricing...

I cut the roast into pieces and sprinkled with a little sea salt to begin. 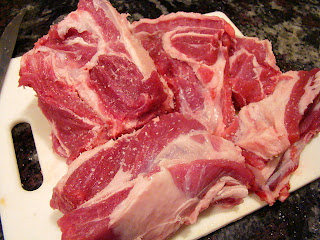 I heated a little oil in my skillet to brown the lamb. You just want to get the meat a nice brown color on the outside for flavor, you're not actually trying to cook the meat. 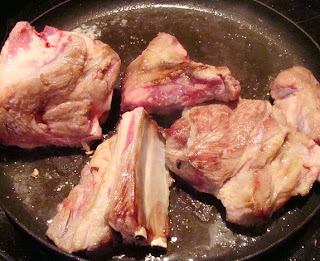 Then chop up potatoes and carrots and onions and season with salt and other spices and place everything in the bottom of your crock pot. 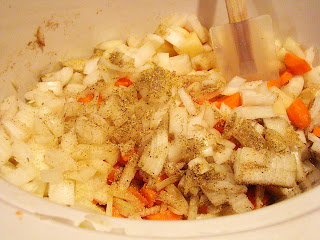 Place the browned lamb over the veggies and then pour on some broth. 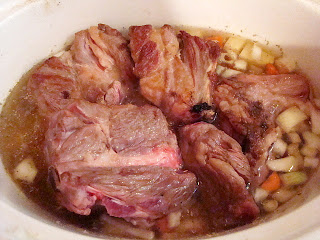 Cook on LOW for 8 hours or until the meat is fall apart tender. At this point it was really late at night and I stopped taking pictures. I removed the lamb and separated the incredibly tender meat from fat and bone before shredding it and returning it to the stew. Then I put the crock pot into the fridge overnight. A couple of hours before dinner, I brought the crock pot out of the fridge and removed the layer of fat that had formed on top. Then I re-heated the crock pot until the stew was simmering. 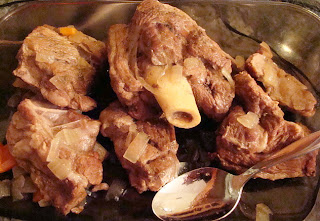 Once the stew was bubbling away, I stirred in a cup of peas (barley would be good here too) because 1. I have an abundance of peas in my freezer and 2. I thought that a St. Patrick's Day stew should have something green in it.

Mix 6 tablespoons of flour into 1/2 cup of cold water and stir the slurry into the stew to thicken it up. Then cover and cook for another 20 minutes or until you are ready to eat. 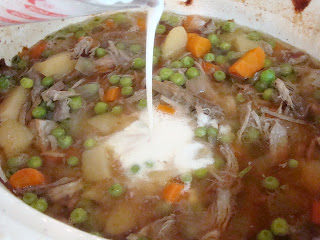 This really did make a lovely stew. It was delicious, but I have to be truthful; as I scooped bites of the stew into my mouth, I found myself wishing that I'd used beef instead. The lamb did lend itself to an incredibly tender protein, but I'm still partial to beef. Maybe the amount of lamb consumed in my formative years has scarred me for life? Probably not. I did have an amazing rack of lamb on my honeymoon, so I haven't completely written it off. I may just stick to dry preparation methods from here on out. For the record, our daughters loved this. My oldest kept sopping it up with her soda bread, exclaiming, "Mom, this gravy is SO good!" Of course, I didn't mention that "the gravy" was actually lamb stew. 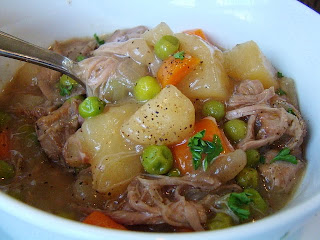 The perfect pair for the stew was Irish Soda Bread. I found the recipe on a website titled, "Society for the Preservation of Irish Soda Bread". The author of this site had some definite opinions on what should qualify as "traditional". Maybe they inspired my free-range lamb rant? Anyway, here are some excerpts from the site, found HERE.

"If your "soda bread" has raisins, it's not "soda bread! It's called "Spotted Dog" or "Railway Cake"! If it contains raisins, eggs, baking powder, sugar or shortening, it's called "cake", not "bread." All are tasty, but not traditional Irish Soda Bread!"

Would "French Bread" (15th century) still be "French Bread" if whiskey, raisins, or other random ingredients were added to the mix? Would Jewish Matzo (unleavened bread) used to remember the passage of the Israelites out of Egypt still be Matzo if we add raisins, butter, sugar, eggs, and even orange zest? So why is traditional "Irish Soda Bread" (19th century) turned into a dessert and labeled "Traditional Irish Soda Bread?" OK, maybe you don't like the analogy, but you get the point!"

"The basic soda bread is made with flour, baking soda, salt, and soured milk (or buttermilk). That's it!"

There is quite a bit of additional information supporting the author's claims about "traditional" Irish soda bread on the site. I encourage you to check out The Society for the Preservation of Irish Soda Bread to read more!

Truthfully, I just liked this approach to soda bread because it was easy to prepare and I knew that my family would probably reject the versions containing raisins and caraway seeds. Plus, I thought that the crusty white bread would be awesome for sopping the stew.

Here's how it came together:

First sift together flour, baking soda, and salt. Then pour in buttermilk. Stir until you form a soft dough. 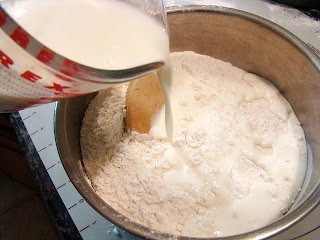 Then turn the dough onto a floured surface and lightly knead. Only knead long enough that the dough absorbs a bit more flour and will hold it's shape. Too much kneading will cause the "gas" to escape and makes for a tougher loaf of bread. 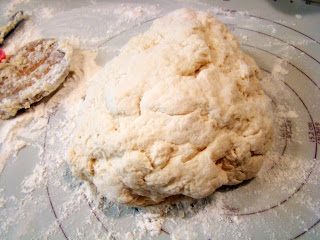 Pat the dough into a round shape and drop it into a lightly greased and floured round cake pan. Using a sharp knife, cut a cross shape onto the top. 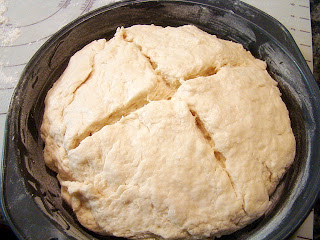 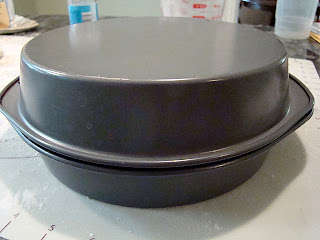 Truth be told, I baked mine a couple of minutes too long. I heard the timer go off, but continued typing an article I was working on. A few minutes later, I snapped back to reality and dashed across the kitchen just in time to rescue the bread. Whew! 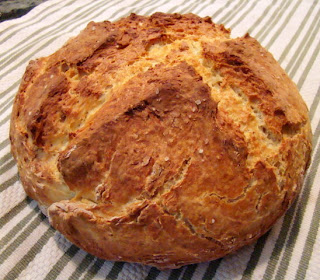 We loved, loved, LOVED this bread. I'll definitely be making it again and I won't wait for next St. Patty's Day to do so. This recipe made for a nice, crusty bread with a dense, tender crumb that was ideal for soaking up the stew, but is also good on it's own with butter or honey. 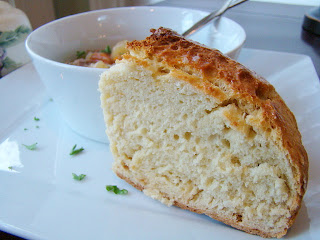 One last shot of our "traditional" Irish meal. Cover and cook on low for 8 to 10 hours or until meat is fall apart tender and potatoes are done. Remove the meat and cut up or shred. Return to crock pot. If possible, refrigerate the stew overnight. Skim fat and return the stew to a simmer.

Dissolve flour in 1/2 c. cold water and add to Crock-Pot with the peas. Cover Crock-Pot, turn to high and cook 15 to 20 minutes until the stew is thickened.

Also, this recipe would make a wonderful BEEF stew. Just substitute the same amount of beef roast and follow the recipe above.

Preheat the oven to 425 F. degrees. Lightly crease and flour a cake pan.

In a large bowl sieve and combine all the dry ingredients.

Add the buttermilk to form a sticky dough. Place on floured surface and lightly knead (too much allows the gas to escape)

Shape into a round flat shape in a round cake pan and cut a cross in the top of the dough.

Cover the pan with another pan and bake for 30 minutes (this simulates the bastible pot). Remove cover and bake for an additional 15 minutes.

The bottom of the bread will have a hollow sound when tapped so show it is done.

Cover the bread in a tea towel and lightly sprinkle water on the cloth to keep the bread moist.

I hope that you all enjoy the holiday!