Cooking Is A Good Thing

There has been a profusion of writing lately about the horrors of cooking, especially dinner.   The first one I read made me sad, the second one annoyed me, and the third one appalled me, particularly the part about two families spending summer vacations in one house at the beach how cooking dinner was not fun. 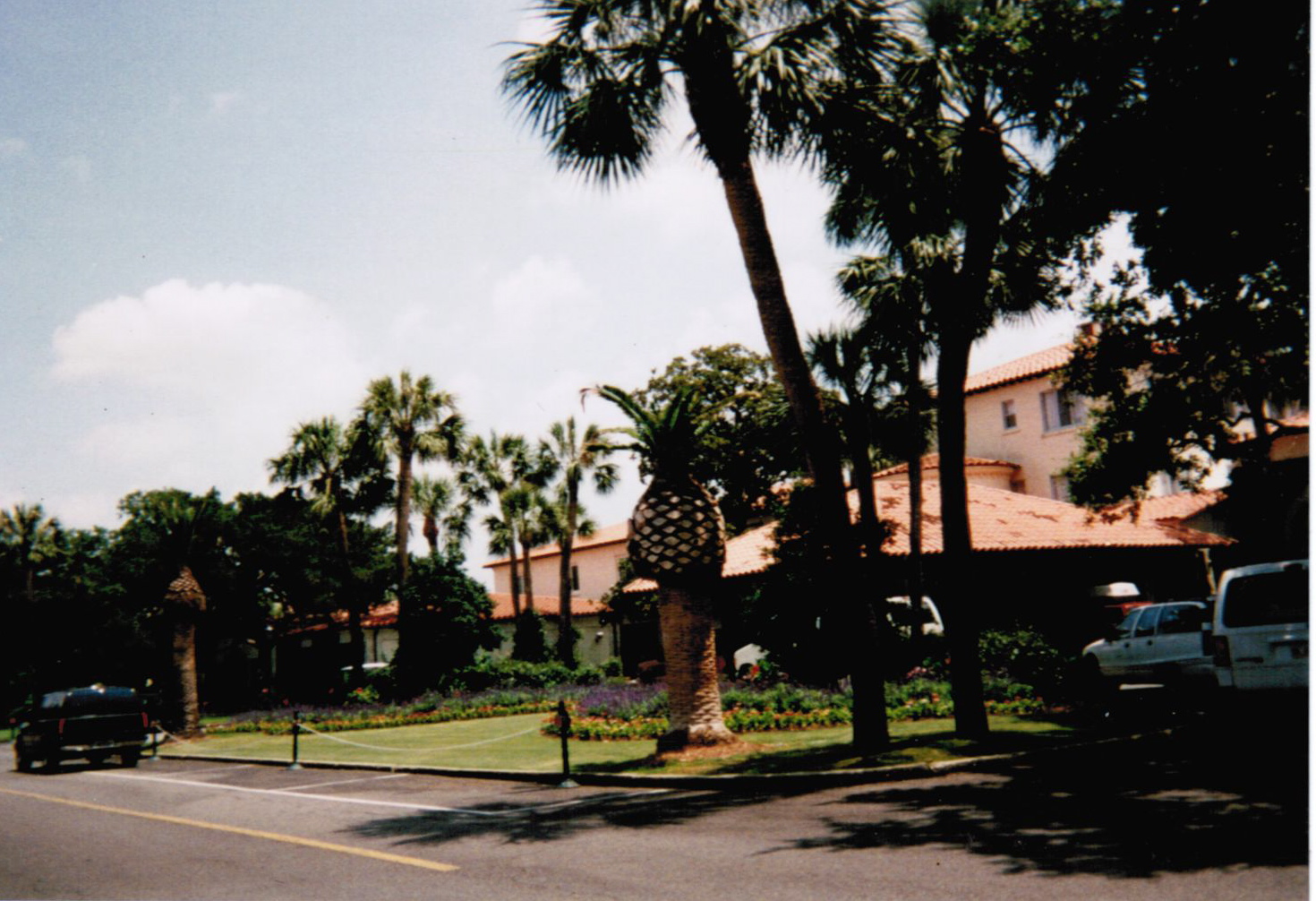 For a period of a few years during the 1990's, every summer my friends Carolyn and John rented a house for a month at Sea Island, the beautiful barrier island that sits off the coast of Georgia.  The Cloister had not yet been torn down and replaced by the extravagant modern hotel it is today; it was still the beautiful building designed by Addison Mizner, and the resort - if you could call it something as mundane as that - was populated mostly by gracious Southern people enjoying a calm, maybe even downright sleepy, good time.  You could sit on the beach reading Ah, Wilderness! just yards from Cottage 57, where Eugene O'Neil wrote it and imagine him emerging from his library, built to resemble the captain's quarters of a ship, to stroll down the beach. 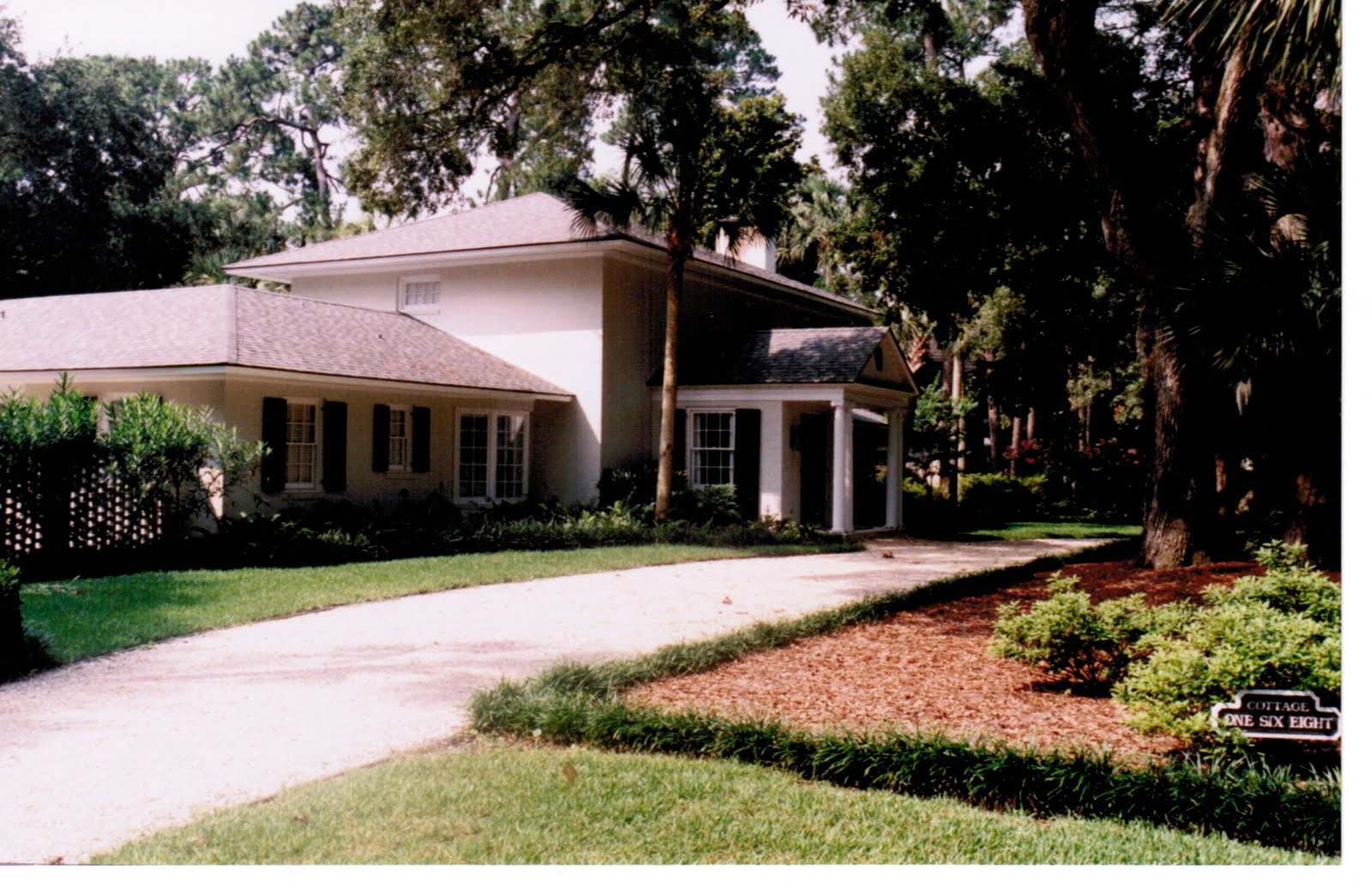 The house Carolyn and John rented was filled with them, their two daughters, Jane and Amy, and their families, and lucky me.  The young husbands, Lamar and Wright, came and went as their jobs in Atlanta allowed, but the girls and their children were there for the duration. There were always eight of us for dinner during the week and up to twelve on the weekends.  During the day everyone did whatever he or she wanted - sit by the pool, swim in the ocean, ride horses, play golf. But starting at 4:00 p.m. Jane, Amy, and I would start cooking together, and at 6:00 p.m. we all sat down to family dinner.  Often, after we had finished eating, everyone else would pile into the car and head to Sweet Mama's on St. Simon's for ice cream and cake, and in the sudden - almost startling - peace and quiet, I would clean up the kitchen, a job I enjoyed. 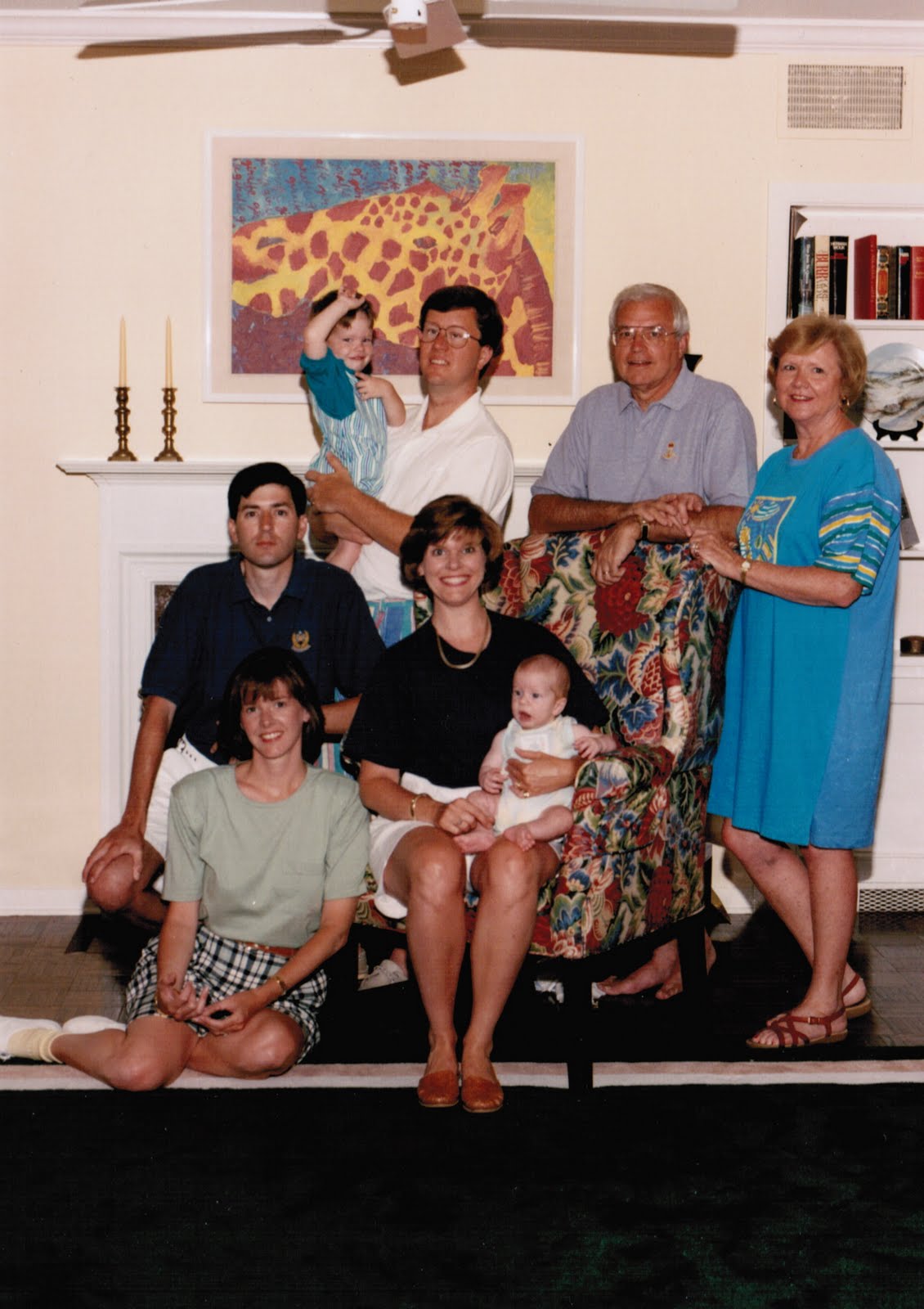 Clarke, Lamar, John, Carolyn, Wright, Amy, Jane holding JohnI am certain that if you asked any one of us about those summers, the family dinners would be mentioned by each of us as one of the highlights of the month. 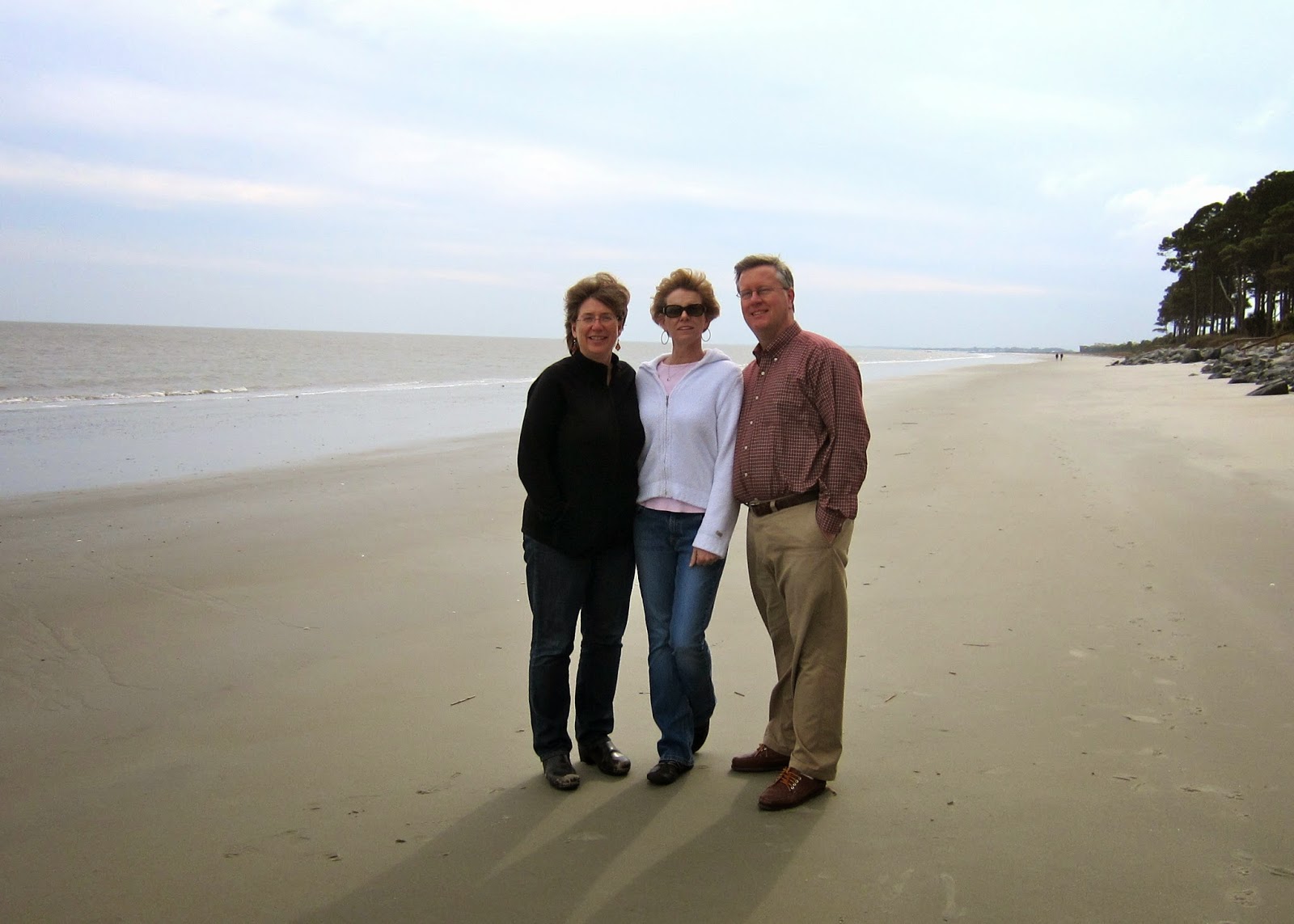 Janet, Jane, and LamarNow Jane is gone, and the next time we go to Sea Island, we will sprinkle some of her ashes on the beach she so loved, in the place she always longed to be.  We will sit down together and toast Jane with a glass of her favorite prosecco.  Instead of going to Sweet Mama's, I will make a little yellow cake in Jane's honor.  It won't be as good as Lady Jane's; we have yet to find her recipe, but we are still looking! I went through Jane's recipe box looking for her signature cake recipe with no luck, so I turned to King Arthur Flour, a great place to go for all kinds of tips on baking and great products.
The recipe I found at King Arthur Flour was for a Plain & Simple Golden Cake, and the cake I made turned out light and delicious.  I used King Arthur All-Purpose Flour since it was what I had on hand. 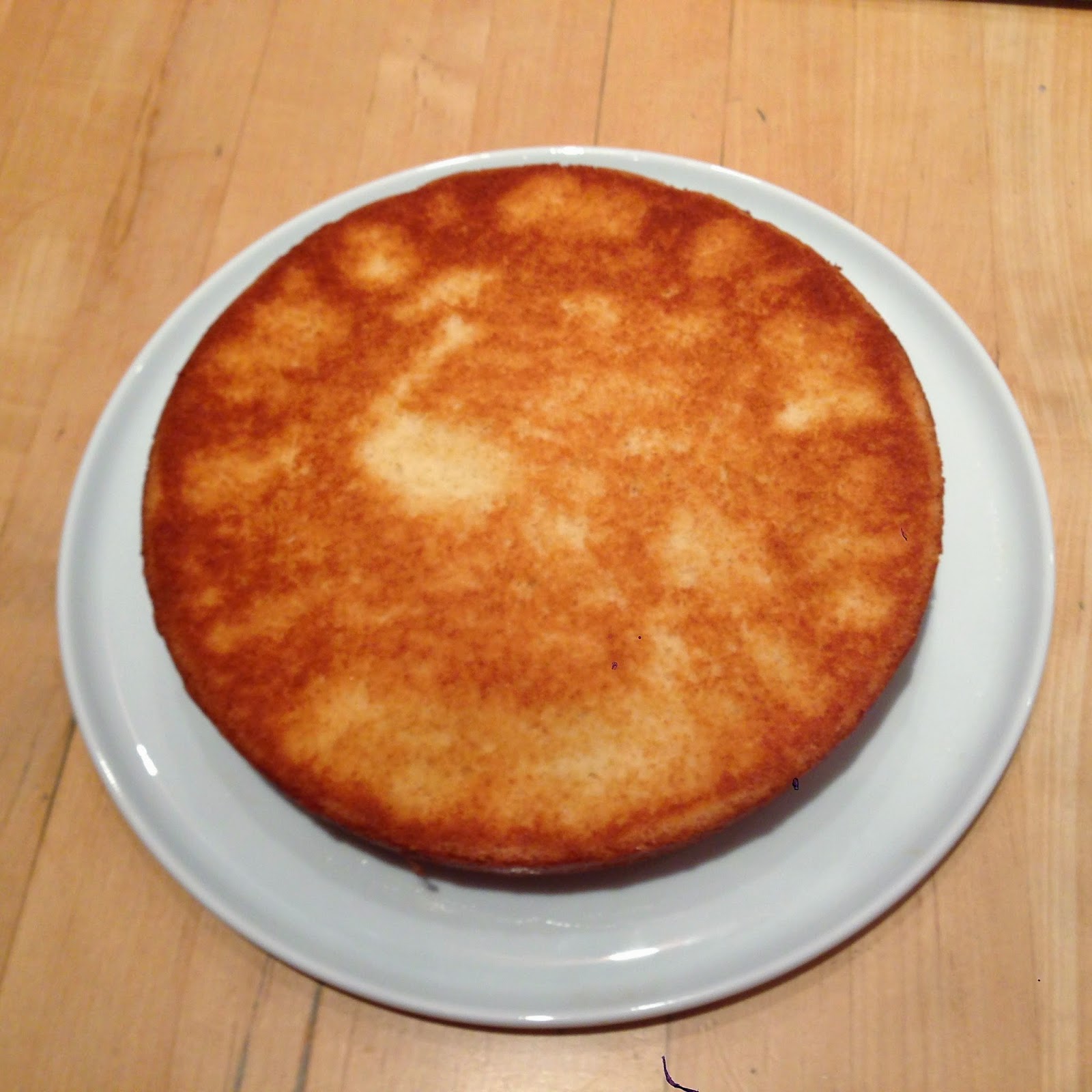 Preheat the oven to 350 degrees.  Lightly grease a 9 x 2-inch cake pan, and line it with parchment.

With a fork stir the flour, sugar, baking powder, and salt in a bowl.

Cut the butter into pats, add it to the bowl, and with a hand mixer set at low speed, mix until the mixture is evenly crumbly.

Now beat it all at high speed for 15 seconds.

Put the batter in the prepared baking pan, and smooth the top with a spatula.

Bake on the middle rack of the oven for about 35 minutes, until a cake tester comes out clean.  The top should spring baked when pressed with your finger.  Do not open the oven to check until at least 30 minutes have passed.

Remove the cake from the oven, place it on a rack, and after ten minutes, run a knife around the edges, and turn out onto a plate.  Remove the parchment, and let cool completely before serving.

This cake can be iced or not.  I served it with macerated strawberries and vanilla ice cream.  Softly whipped heavy cream would also be lovely, scented with a little Amaretto if you wish. 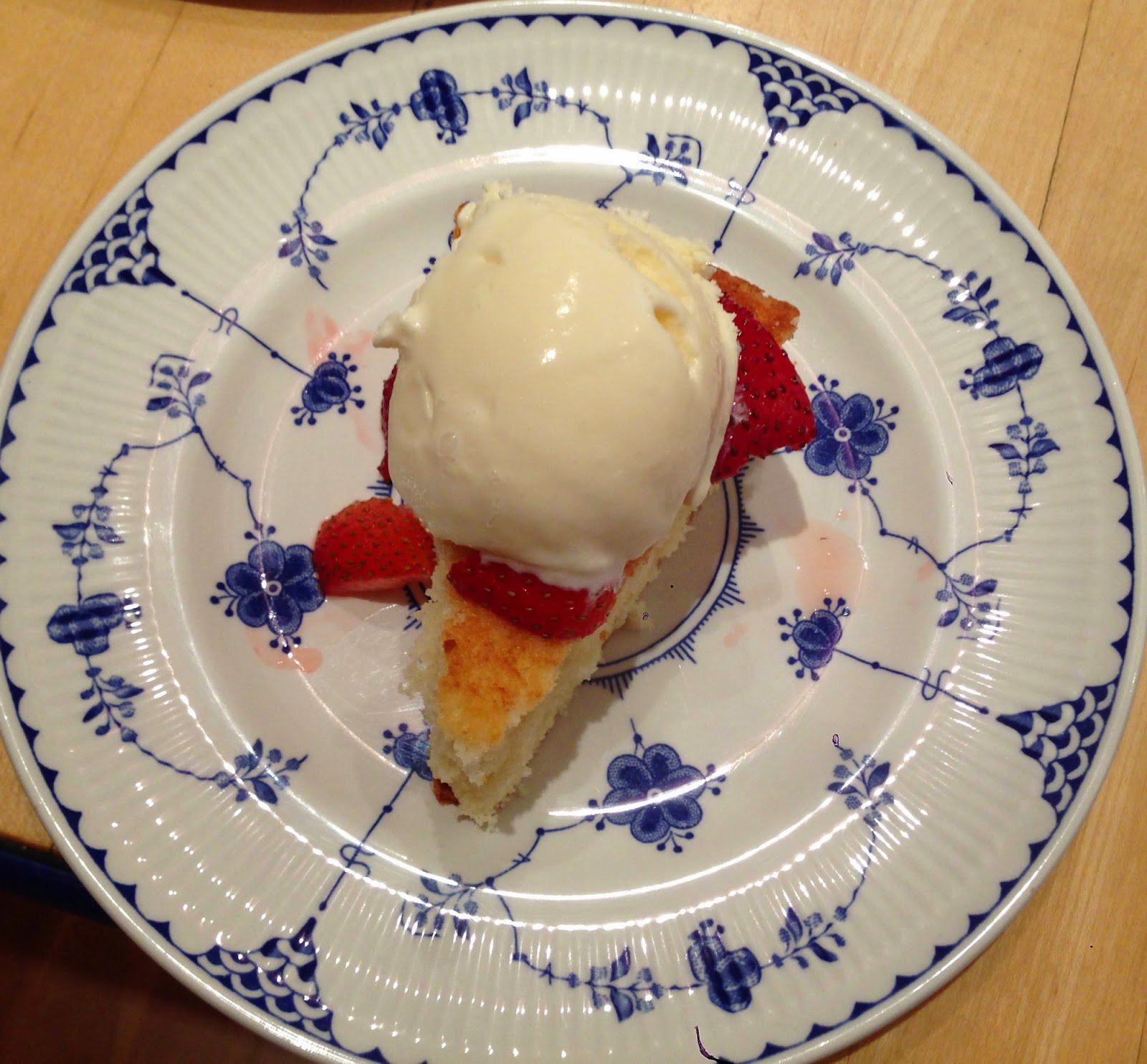