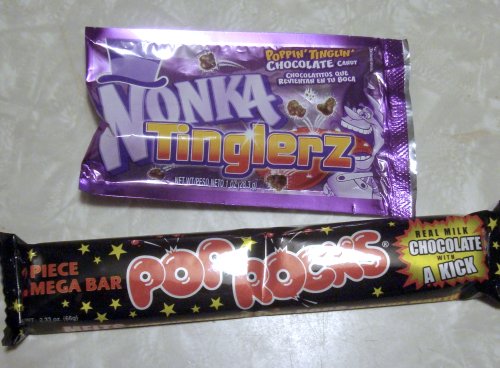 What do you get when you combine Pop Rocks with chocolate? You get lumpy chocolate that explodes in your mouth when you try to eat it.

You'd think that a chocolate category so narrowly specialized wouldn't have room for more than one manufacturer. Alas, you'd be mistaken. In addition to a Pop Rock-studded milk chocolate bar produced by Zeta Espacial SA, the Spanish company that's been making Pop Rocks since 1979, Nestle's Willy Wonka Candy Company recently introduced it's own brand of fizzy chocolate, which they call Tinglerz. Tinglers are small nuggets of carbonated candy coated in milk chocolate. The presentation is different from the Pop Rocks bar, but the effect is very much the same. 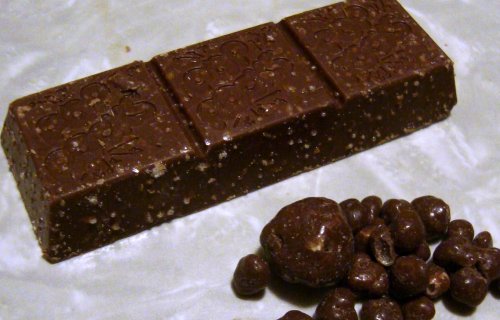 The Pop Rocks bar is big and blocky, almost three-quarters of an inch thick, and made of rather average-quality chocolate thicky studded with Pop Rocks fragments. The Tinglerz, with their chocolate coated candy, is smoother and somewhat more attractive just because the pieces don't look like they've been filled with some kind of general debris. And the two confections behave differently when eaten, as well.

The Pop Rocks bar is aggressive. The quality of the chocolate is a little bit below that of the average Hershey bar, and it's grainy and kind of sticky. The Pop Rocks contained within are as sharp and crackly as the ones that used to sting my mouth and gums when I was a kid, though, and the powerful sensations almost make up for the lousy chocolate.

By contrast, Tinglerz are coated in very smooth and rather good chocolate, in varying sizes according to how big a chunk of carbonated candy it covers. The reaction of the candy is somewhat milder and more reminiscent of a very strongly-carbonated soda pop - lots of fizzy noise and crackle, but nothing that borders on the painful the way Pop Rocks sometimes do.

Which one is better? That depends on your priorities. For fizziness, go with the Pop Rocks bar. For taste, go with the Tinglerz.

Pop Rocks Candy Dot Com - An interesting combination fan site / salesroom that covers a lot of the pop culture surrounding Pop Rocks. If all else fails and you just can't find Pop Rocks in your local stores, you can buy them there.