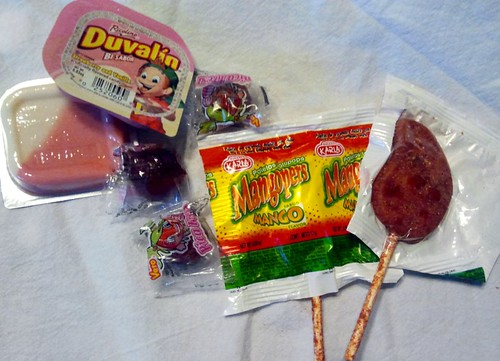 Left to right: Duvalin, Pica Fresa, Mangopers lollipopsSo, the other day I made this huge mistake and bought an assortment of Mexican candy from T J Maxx.  It didn't seem like it would be such a bad idea - didn't look all that bad, and the ingredients promised spicy chile peppers!  (Yes, I have a weakness for hot spice, and the spice/sweet combo was just very appealing.)
Unfortunately, the three candies I brought home became the Trifecta of Disappointment.
Duvalin Bi Sabor Strawberry-Vanilla is advertised as a "cream candy." It comes in little tubs, with little plastic sticks to aid consumption.  The closest I can come to describing it is "cheap frosting."  It was exactly as if I had bought little sample containers of pre-made cake frosting.  This, of course, is not unheard of in North American supermarkets (Betty Crocker makes Dunkaroos, which are nothing but a small serving of cookies and a tiny tub of frosting to dunk them in. But at least there are cookies there to somewhat cut the frosting jolt.)  Knowing that Duvalin Bi Sabor is so frostingesque should tell you just about all you need to know about it.  I can't really condemn it - there are plenty of people who would just love the stuff - but I kind of expected something more along the lines of a taffy, so there ya go.
Pica Fresa are little balls of individually wrapped starch gum rolled in "hot" chili powder. They taste kind of like what you'd get if you coated Twizzlers in cayenne pepper (but took away much of the heat.)  They would have been better if they were hotter. And a little chewier.
Mangopers mango flavored lollipops were the absolute worst of the bunch, by a huge margin, given their utter horridness. They appeared to be made of mango-flavored hard candy coated in ground chile pepper, but honestly, I'll never know. The coating was so nasty - the stalest possible chile powder seemingly blended with a heavy dose of salt - that I never even made it to the candy within.  Truly bad stuff.
Never again.